17 Actors, 10+ Crew, 3+ Months of Rehearsals: The Merchant of Venice Staged at IIM Indore

IIM Indore witnessed two and a half hours of marvellous theatre performance of William Shakespeare’s The Merchant of Venice on February 28, 2020. This classic play’s adaptation was directed by Professor Dr. Shweta Kushal, Faculty, IIM Indore. The cast consisted of 17 actors and actresses from various programmes of the Institute, who put their best foot forward after three months of rigorous practice. The play was attended by the entire IIM Indore community, army officers from Mhow, special invitees and theatre lovers from the city.

‘This is the first time our team is staging a play by William Shakespeare. We all are very excited about the performance. I have tried to put in a more humanised version of the characters on stage, rather than the stereotypical depictions’, said Professor Kushal, the director of the play.

Antonio, an antisemitic merchant, takes a loan from the Jew, Shylock, to help his friend Bassanio to court Portia. Antonio, in arrogance, agrees to the contract as he believes that he will be able to repay the loan. Unfortunately, he can not repay the loan, and without mercy, Shylock demands a pound of his flesh in return. Shylock is also upset as his daughter had eloped with Antonio’s friends. The heiress Portia, now the wife of Bassanio, dresses as a lawyer and saves Antonio. The play depicts multiple emotions depicting love, anger, rage, discrimination, wisdom, friendship, justice, hatred, jealousy, greed and more.

‘I believe these last 3 months have been a great learning experience, from both personal and professional point of view. I loved how there were people from different academic programmes in the play and how it brought us all together. Our play director, Professor Shweta Kushal did her very best in trying to bring out the best in us. Overall, it was a perfect experience for me in learning and growing, as a team’, said Gaurav Pareek who plays Gratiano. 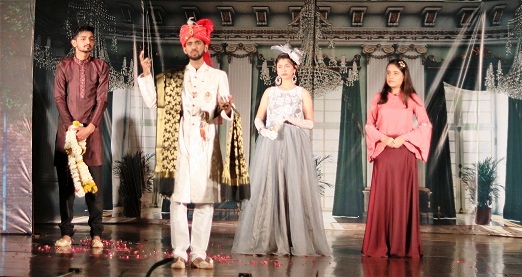