With just about a month to their international departure, students of IIM Indore going on the student exchange program to France received an array of guidance and services from Campus France, Pune at the IIM Indore Campus on July 23, 2015. 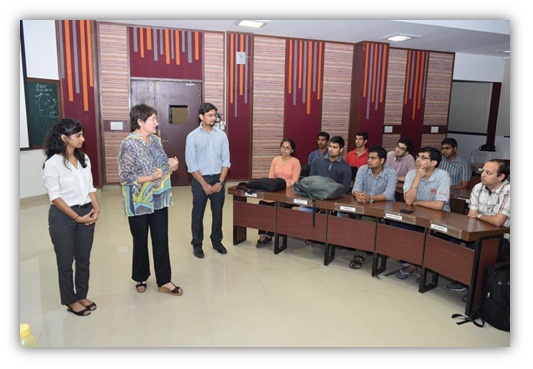 The International Student Exchange Committee, IIM Indore, organised a 2-day interaction where students appeared for Visa interviews on campus and received a formal preparatory session. The chief guest for the evening was Dr. Sandrine Maximilien, Attaché for Science and Technology at the French Embassy in India.

Dr. Maximilien in her insightful address said, ‘Let this be an exchange in the true sense. We want to know about Incredible India. So be the true ambassadors of your campus and beautiful country. Please enjoy the stay and make the most if this chance’.
Proficient in English, French and Hindi, she surprised the students by explaining French pronunciations in vernacular script. In appreciation of the institute she mentioned that she admiredthe campus –beautiful, serene and calm.

Her interaction was followed by a presentation by Ms. Rashmi Arvikar, Education Advisor, Campus France, Pune. Commencing with a simple quiz on one of the leading FDI Destinations – France, she proceeded with detailed information and tips on different aspects of a students’ stay there. Ms. Arvikar acquainted students with all administrative duties to be completed before departure as well as formalities on arrival in France. Her presentation also explained a travel check list and security and insurance requirements. The students were guided on all minutiae pertaining to Visas and documentations to be submitted. 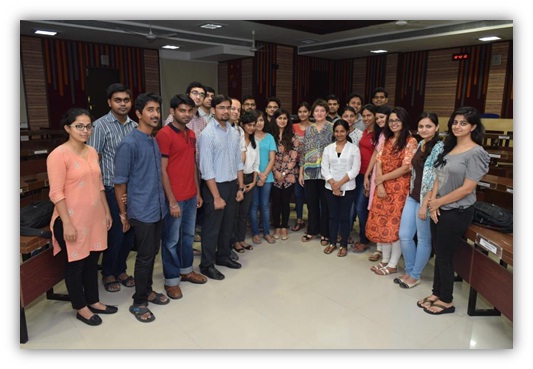 Two IIM Indore students, Sanchit Garg and Kapil Kanungo were awarded the Charpak scholarship for Academic Excellence. 49 students from the second year of IIM Indore will be pursuing their 5th term of their PGP course in France. Of them 29 will be awarded Long Stay Visas (for stay over 90 days) while rest will be studying on Schengen Visas. Other than France, around 30 students will also be going to countries like Germany, Italy, Austria, Belgium and Greece between September and December.

Post the presentation, there was a round of question-answers where students clarified all their doubts with Dr.Maximilien and Ms. Arvikar. Students broke off from the session noticeably better prepared for their tour de france.