The first round of Sweden National Level Inter-Collegiate Quiz Competition was held at IIM Indore on August 12, 2015. Competing with 123 registered teams from Indore and around the city, IIM Indore students bagged a position in the top six teams in the Indore round. The other five teams belonged to IIT Indore, IIITDM Jabalpur, NLIU Bhopal and two teams from DAVV Indore.

The quiz master for the event was Mr. Kunal Savarkar, an architect by education and a quizzer by passion. He is also the cofounder of Quizcraft Events & Communications Pvt. Ltd. The preliminary round was made up of 25 questions.  On the basis of evaluation of answers given by the students, top 6 teams moved on to the next round. 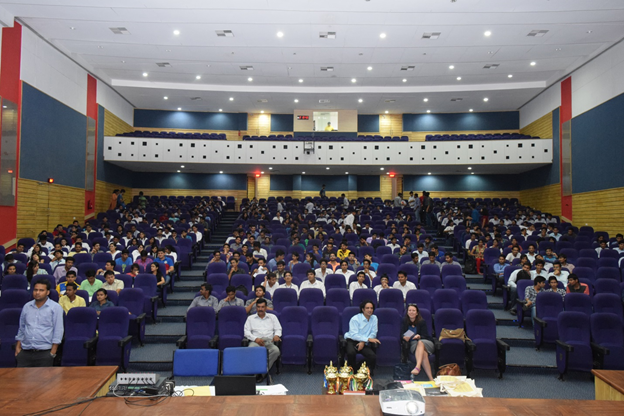 The next rounds consisted of ‘Anagram’, Visual round, ‘Direct Oral’.The host Mr. Kunal also kept the event interactive by throwing questions at the audience and offering gifts to the winners.

With the top 2 teams (A- IIITDM and B- NLIU Bhopal) holding their positions began the last round, Buzzer Round. At the end of a gripping 15 minutes, team A from IIITDM Jabalpur emerged the winners, nonetheless given a tough fight by the runners-up team B from NLIU Bhopal. The winners of the Indore round will get a chance to participate in the nationals to be held at Delhi. The winners were felicitated with trophies and with this the quiz came to a wonderful closure.

About the quiz: As a part of the Sweden India Nobel Memorial week, the Embassy of Sweden organizes a national level inter-collegiate quiz competition called Sweden India Nobel Memorial Quiz. The quiz is currently in its ninth year and has broken previous records witnessing participation from 123 registered teams form colleges in and around Indore.