A special Guest Talk was held at IIM Indore for the PGP (2018-20) participants on February 16, 2019. The expert for the talk was Mr. P. Raghavendran, President of Reliance Industries Limited (RIL), who gave an insightful talk corresponding to the field of Strategic Management—focusing on ‘Future of Energy’. 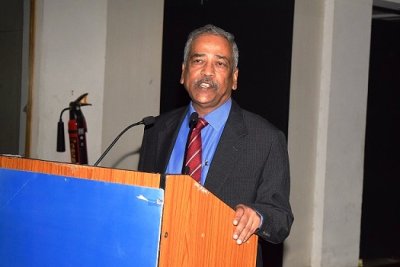 Professor Prashant Salwan, Faculty, IIM Indore welcomed Mr. Raghavendram and briefed the participants how RIL—which ranked 495 in Global Fortune 500 list in the year 2004; increased to rank 148 in 2018. Professor Salwan also informed them that RIL is now 62 Billion USD global firm  and ranks first in Oil and Gas, Telecommunications and retail business in India. Multiple innovations were carried by RIL indigenously ranging from refinery efficiency, telecom asset utilization and people management, he said. Introducing Mr. Raghavendran, Professor Salwan noted that he is the President of RIL Refinery from 1994 and has many firsts in his career including commissioning of Asia’s largest refinery and world’s 5th largest refinery in record time. The vision of its founder and current leadership has helped India in world competiveness rankings and self sustainability, he said.

This was followed by the talk by Mr. Raghavendran, which revolved around ways to formulate and implement corporate strategy, keeping in mind the increasing need for sustainability. Mr. Raghavendran pointed out the scarcity associated with resources that are currently in use and how a shift towards renewable resources is required bringing to light concerns regarding global warming and increasing costs. He mentioned that however, a complete shift towards renewable resources needs immense research and development to make them feasible for our current energy requirements.

The talk concluded with an engaging Q&A session, and was highly appreciated by the IIM Indore community at large. This was followed by a presentation on salient  features of leadership of Dhirubhai Ambani. The event concluded with a Vote of Thanks by Professor Prashant Salwan.