Two guest talks on ‘Sustainable Development: Perspectives in and from China’ were held at IIM Indore on October 14, 2016 by the Special Interest Group (SIG) on the theme Comparing Business in China and India. Professor Jayanta Bandyopadhyay, Advisor, International Union for Conservation of Nature (IUCN), New Delhi and Professor Sanjay Chaturvedi, Political Science Area, Centre for Study of Geopolitics, Panjab University, Chandigarh were the speakers for the event. 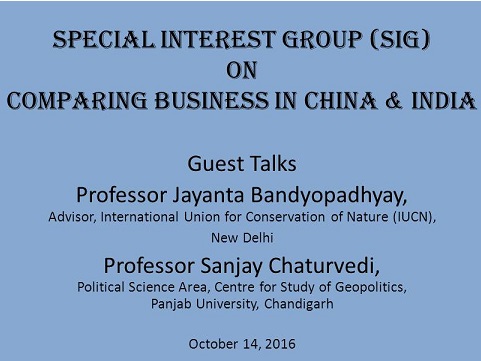 Professor Jayanta Bandyopadhyay first discussed about his and Professor Chaturvedi’s forthcoming book: Environmental Sustainability from the Himalayas to the oceans: Struggles and Innovations in China and India. He said that book focuses on innovations and struggles and comprises of their individual papers. Professor Chaturvedi praised IIM Indore’s vision for its social science and management cohesion. He said that social innovation is very important, particularly in global south. Their book deals with critical social science engagement.

Professor Chaturvedi then started the talk with Proverbial Billion Dollar Questions like, Can Billions in the ‘Majority World’ ‘Develop’ the way millions in the Minority world have? How can Public-Private-Partnerships facilitate the realization of a new paradigm of development? Professor Chaturvedi noted that we have to be very serious about public-private-partnership and try to end poverty in all forms everywhere, by ensuring access to affordable reliable sustainable and modern energy for all and ensure sustainable consumptions and production patterns. Discussing about India and China relations, he said—‘China and India are ‘Planetary Powers’ and ‘Civilizational Twins’. The road both India and China have chosen for progress leads to unsustainability.’

Professor Bandyopadhyay then discussed on the topic—‘Sustaining Economic Growth in China: Policy Innovations in River Management’, wherein he talked about how rivers are crucial for economic growth of China. He talked about rapid economic growth in China and its environmental impacts in which he highlighted various points such as India and China share a long civilizational tie and also long political boundaries. He raised a serious concern that India and China will be water scarce countries. Therefore, water as proper study of management is important.  ‘For two largest populated countries with rapidly growing economies, water is essential and Himalaya’s sustainability is important for both India and China’, he said.

He also put light on the global warming issue and told that Tibet is warming at very fast level. The Himalaya is also declining steep. Therefore, India and China are facing the same problem of river planning.

The talks were attended by students, staff and faculty of IIM Indore.