The first day of the Summit began with the lighting of the lamp in the inaugural ceremony by Mr.Ashwani Lohani, Chairman and MD, Air India and Colonel Gururaj Gopinath Pamidi (Retd.), CAO, IIM Indore.

Mr. Ashwani Lohani then delivered the Keynote Address. He spoke about the cardinal rules of business essential for the success of any venture. Having been a part of multiple government organisations from the railway to the aviation ministry, he emphasized the utmost importance of human resources stating that ‘HR has to come from heart, not strategy’ and people are the most important component in any organisation. Addressing the entrepreneurs in the audience, Mr. Lohani asked them to believe in the power of gut and work hard for their own sake, beating and bettering themselves and being fearless even when they are afraid. He concluded the session with something that resonated with the audience, ‘If you are committed to deliver, you will deliver.’

This was followed by the start of the Speaker Series with Ms. Shruti Shyam Sundar, Marketing Head, Zee Entertainment who talked about the power of television. She stated that ‘the chains of habit (of watching TV) are too weak to be felt until they are too strong to be broken.’ She spoke about the emerging demand for Indian soaps in India primarily because it engages people together. She spoke about the marketing and advertising strategy of Zee cinema, the oldest cinema channel in the entertainment industry that launched a wide range of advertising campaigns to cater to a diverse audience. T

This was followed by interaction with Mr. Prashant Sharma, Facebook who elaborated on the concept of ‘Zero Friction Future’ which is based on reimagining consumer journeys. He made the audience imagine scenarios where one could test drive a new car without stepping out of their houses or one could type directly from their brains. He drove home the point that consumers have become impatient in today’s world and are not interested in the journey and they want things now. He spoke about the marketing framework where any business can be seen as a funnel comprising of different segments like awareness, consideration, intent and purchase. These segments are sometimes hampered by frictions which a business must constantly keep improving upon. He concluded the discussion by emphasising on the fact that how the consumer journey is a constant and circular process and lies at the heart of every venture.

The speaker series continued with Mr. Pranav Pai, 3one4Capital who talked about how digitization has transformed the world and how India has benefited tremendously from it with millions of smartphone internet users which give start-ups easy penetration into their everyday lives. He also talked about the trinity of Jan Dhan, Aadhar and mobile which has led to a sophisticated ‘India Stack’, a game changer for electronic payments and a jump start to a cashless economy. He concluded with a note on Digital Darwinism stating that the companies that invest in digital transformations will be the most effective, efficient and stay the longest.

The Start-up Expo was the highlight of the day, which had more than 50 start-ups sharing their innovative ideas on various themes like e-healthcare, ed-Tech startups, IoT and Social Media. 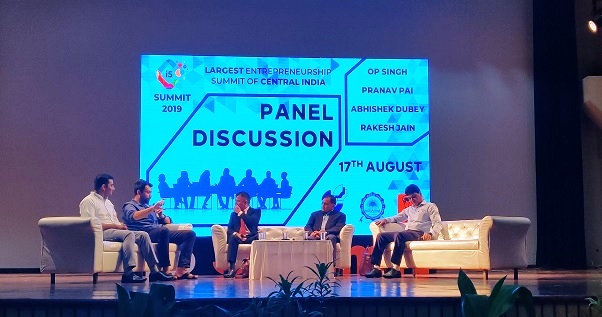 The second half of the day had a panel discussion moderated by Professor Himanshu Rai, Director, IIM Indore along with Mr .OP Singh, DGP UP Police; Mr. Pranav Pai, Founder, 3one4Capital, Mr.Rakesh Jain,; Mr. Abhishek Dubey, Founder, Muskaan Dreams, as panellists. The topic for panel discussion was ‘Social Entrepreneurship.’ The panellists talked about the extra factors like compassion and sustainability required for start-ups to be social entrepreneurship ventures. They also discussed how the ease of access of information is playing a role in providing a starting point for people looking to solve social problems.

The stage was then graced by the presence of Mr. O. P Singh who talked about the challenges faced and managing strategies adopted by the 2019 Kumbh Mela, where safety of the millions of people attending the event was of utmost importance. He talked about effective crowd management and how technology (apps and central control rooms) was used to leverage the gap between the previous editions and this one.

The Speaker Series continued with Mr. Abhishek Dubey who started the discussion by stating how social entrepreneurship has become all the more important in today’s world with 70% of the people who reside in villages and don’t have any access to technology. Mr. Dubey spoke about his dream of getting this segment of people into the mainstream. This dream is what cultivated into the synthesis of Muskaan Dreams by providing them with virtual learning tools. He ended the discussion with a thought provoking question in the minds of the audience, ‘will the people in villages who are already struggling to become a part of the mainstream, be able to cope with the upcoming changes in technologies like AI?’

The event was then graced by Mr. Rahul Singh, founder of ‘The Beer Café’ who spoke about his important acronyms and what is the purpose of life. He motivated the crowd telling them there is either a DO or a DON’T; the ‘trying’ concept doesn’t exist.

The last speaker of the summit for day one was Mr. Anil Swarup, ex IAS servant, former secretary of coal ministry shared his insights and experiences while working with the government sector. He had a fun take on the transfers involved in civil services and also entertained the audience with his ‘shayaris.’

The second day of the Summit began with the flagship event GetFunded!, which provided a platform to budding entrepreneurs to present their ideas to angel investors and also learn from their experiences.

The budding entrepreneurs came up with some of the most unique ideas. Indore Artist is a platform for on-boarding artists & talents across genres & cities to help them showcase their work, gain recognition and have access to opportunities to earn. Arunabh is a CSR initiative school for differently abled learners which tries to identify kids with Special needs at an early stage, have intervention Programs and an outreach using the Anganwadi’s to bridge the learning gap. Upvaas is a revolutionary niche food start-up providing a varied range of gluten free, fresh and healthy options for people who are fasting. A lot of ideas were presented in the educational space. iMentor is a Ed-Tech start-up in the Digital Citizenship and Internet maturity domain which is targeted towards educating teens about cyber bullying, plagiarism, social disorientation and similar problems faced while accessing internet resources.Tutor247 is a personal mentorship start-up with online doubt solving capabilities where students can post their written doubts and get instant audio solutions to their problems from India’s Top Educators. QikMe, a versatile comprehensive software providing an innovative solution to the student community. It has a student portal called Adda where students across the country share information and notes. Scool., an experience based learning platform where hand-picked  mentees & mentors are connected for live learning in verticals like vocational trainings, AI, robotics, AR, VR and many more.

A workshop was also hosted by ‘Digital Gurukul’ on the topic Digital Marketing in Politics. It was an interactive session on how digital media is an extremely effective tool for political parties in today’s world. Discussions revolving around the use of effective and efficient digital marketing techniques to influence large masses were carried out.

The second half of the day witnessed more speakers from the Speaker Series lineup. Mr. Kunj Sanghvi, Co-Founder, InsideIIM.com talked about how he came up with the idea of Inside IIM with a college friend proving a complete platform for everyone in the B-school ecosystem starting with B-School aspirants to top-notch recruiters. He talked about his love for storytelling and wanting to add value by giving the example of his book ‘Pehla Kadam’ which explained the boring financial concepts using famous instance from Bollywood movies. He concluded with the message of ‘making an impact through your work’ while leaving ego aside and having a die-hard attitude towards your business idea while having a good time.

The event continued with the quizzing expert Mr. Giri Balasubramanium – Founder & CEO, GreyCaps. He  shared lessons from his 15 year experience of starting up in the quizzing space at the time KBC came into picture and ‘dotcoms became dotgones’ asking the entrepreneurs to ‘expect the unexpected’ and also ‘accept the unexpected’ in order to stay on your path to business success. He also stated that ‘money should never be the driver of your business’ emphasizing that great ideas are what make businesses great. He also talked about how ‘your salespeople are your best VC’s’ and funding should only be taken at the stage when you are in the demanding position. After their speeches, there was a Q&A session where they answered questions put up by the audience.

The two-day event concluded with a closing talk by Mr. Sandeep Aggarwal, Founder of Droom and Shopclues. He emphasised the importance of e-commerce in today’s world. He talked about how the country has produced local heroes to whom our Indian consumers can relate to ranging from Binny Bansal to Vijay Shekhar Sharma. They created the spirit of entrepreneurship and innovation. He shared his journey and learnings leading to the founding of Shopclues and Droom.  He spoke about how he developed an entrepreneurial zeal even after working for 12 years in 7 different companies. He concluded the session with the keynote learning that there is no age for becoming an entrepreneur.

The i5 Summit came to an end with all the participants enriched and inspired.