Among the cool breeze and rainy sprinkles, IIM Indore celebrated the 71st Independence Day on August 15, 2017 with full patriotic zeal and enthusiasm. The entire IIM Indore community, including students, staff, faculty and their family members attended the function. 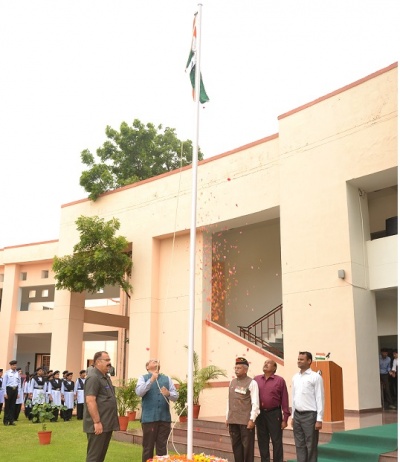 The event began with the unfurling of the Tri-Color by Professor Rishikesha T. Krishnan, Director, IIM Indore. Col. (Retd.) Gururaj Gopinath Pamidi, CAO, IIM Indore was also present on the occasion. This was followed by the National Anthem, which resonated with pride across the walls of the academic block.

Professor Krishnan in his Independence Day Speech expressed his gratitude towards the contributions of all countrymen who enabled India’s independence from Britain 70 years ago.

He noted that the best way to thank the countrymen is by doing all we can, to build the India of their and our dreams. Professor Krishnan mentioned about the celebration of the 75th Anniversary of Quit India Movement at the Institute, where the IIM Indore community took a pledge to make the next 5 years a period of intense effort to address several important challenges that we face. He urged to think hard and resolve how each person can individually make a substantive difference to the country in the next few years. ‘The best place is to start is in our own ‘karmabhoomi’. What this means is that we should individually resolve to do the best we can in every task we undertake. Excellence should be our objective’, he said.

Discussing about the Institute’s achievements, Professor Krishnan noted that the Institute ranked #10 for the last two years consecutively in the National Institutional Ranking Framework (NIRF). Our goal should be to break into the top 5 within the next 5 years, he said.

Encouraging the gathering to inculcate excellence in self, Professor Krishnan said that making the best use of these resources implies different things to different groups within IIM Indore. ‘For faculty, this means striving for excellence in research, teaching, training, outreach and administration. For staff, this means excellence in every operational task whether it is in the Hostel, Estate, an academic programme, or administrative or support function. For students, this means no compromise on academics, sports, external contests, research, or any other activity undertaken’, he said.

He advised the gathering to utilize knowledge not only for our own benefit but for the benefit of the community and society. He then discussed about the School Adoption programme in 4 government schools in the vicinity of the Institute. He also encouraged everyone to not discriminate against others, and not allow others to discriminate based on caste, language, region, religion, gender, disability or sexual orientation.

Discussing about what leads to longevity and happiness, he said, ‘We might think the answer is related to name, fame or money. But the critical finding of this study is that an important predictor of longevity and happiness is the ability to build and sustain strong relationships with people particularly when you are young.’

Expressing his concern about increasing trend to communicate with others electronically rather than face-to-face, he said that we need to resolve and invest more of our time in building stronger relationships with people around us.

He concluded his talk saying, ‘I urge all of you to put in your best effort to achieve excellence in all you do; share your knowledge and expertise with others; reach out proactively to the society around us; and invest more time in building relationships with others so as to build an India that fulfils the dreams of our founding fathers.’

The event concluded with high tea for everyone.