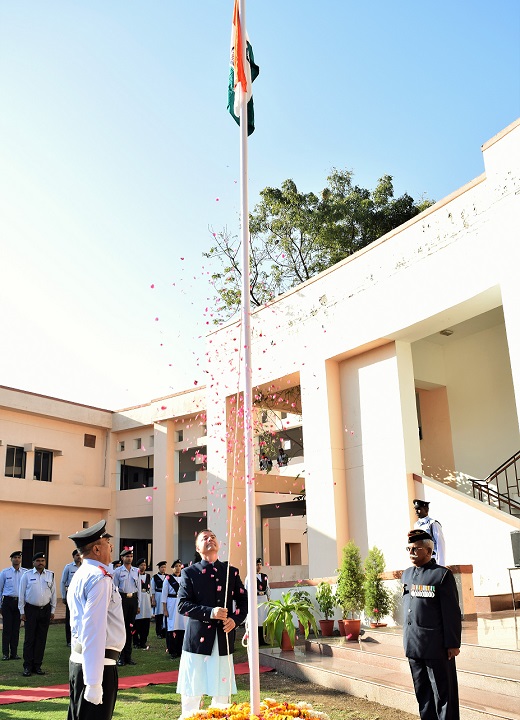 IIM Indore community came together at the Institute to celebrate the 71st Republic Day on January 26, 2020. The celebration began with hoisting of the Tricolor by Professor Himanshu Rai, Director, IIM Indore and Col. Gururaj Gopinath Pamidi (Retd.), CAO, IIM Indore.

This was followed by the National Anthem sung by the entire IIM Indore community members. Professor Rai then delivered the Republic Day Address. He noted that there’s a big difference between a country and a nation. ‘A country can be built anywhere if you have a certain amount of population and a certain amount of land. However, to build a nation, we also need sovereignty, civilization and culture. Pandit Jawaharlal Nehru contributed to the people management, Sardar Vallabh Bhai Patel contributed to sovereignty and Baba Saheb Bhimrao Ambedkar contributed to the civilization’, he said. He noted that we should not only be aware of our fundamental rights, but also know our fundamental duties. He then discussed about the 11 fundamental duties and mentioned how IIM Indore is contributing to the nation by performing these duties.

‘We should all practise good deeds. No matter what designation we hold, we should never use a language or do anything which might hurt someone. Always treat people with dignity’, he said. He added that there’s a lot of anger in the nation. We need to promote peace in the country, irrespective of the religion, cast, gender, demographics, etc.’, he said.

He announced that the Institute aims to promote the female employees and plans to conduct financial literacy workshops for them, to make them financially independent. ‘We would not only conduct training sessions, but would also help them to start their own business and promote entrepreneurship’, he said. He also noted that the Institute would help the children of the nearby government schools to learn internet and ensure that they make safe use of the technology.

Mr. Paras Bharadwaj (IPM 2017-22) was felicitated for his loyalty to the Institute by handing over the confidential data found on a public domain to the higher authorities.  Mr. Roshan Jaiswal, Mr. Purushottam Kalkhar (both drivers), Mr. Bansidhar Panda; Mr. Mansigh Makhwana (both Security Supervisors), Mr. Narayanan Kaushal, ESM Caretaker; Mr. Bharat Chouhan, Mr. Tejram Parmar, Mr. Prakash Dubey, Mr. Jairam Varma (all caretakers) were felicitated with Bravery Award for taking quick decision during a fire-incident on campus and dousing the fire with the help of fire extinguishers on time.

Awards for honesty were given to Mr. Ganesh Waghmare and Mr. Bharat Singh Rajput (both attendants) as well.

This was followed by mesmerising dance and song performances by the members of IIM Indore community. The entire central lawn echoed with applause, enthusiasm and patriotic zeal. The event concluded with the national anthem played on flute by participant —-followed by high tea for the entire community.