With an objective to remain fit and health and understand the importance of Yoga, IIM Indore celebrated the 5th International Yoga Day with great fervor, witnessing enthusiastic participation from the faculty, students and staff alike. Swami Videh Yogi Ji was invited to lead the morning yoga session.

The session began with a welcome address from Professor Himanshu Rai, Director, IIM Indore. This was followed by the lamp lighting. Professor Rai established the need of Yoga in today’s culture and laid emphasis on the 8 elements of Yoga i.e. Yama, Niyama, Asana, Pranayama, Pratyahara, Dharana, Dhyana and Samadhi. He also talked about how the achievement of later 4 elements depends on the dexterity in the initial 4 elements.

Swami ji then started the session with a little perspective on yoga. He said that yoga can be seen as ‘management of life’. This was followed by a prayer and then yogic exercises, beginning with asanas. He started off with shoulder exercises, laying importance on how today’s lifestyle really takes a toll on our shoulders and thereby such exercises carry much more importance today. During the course of event, he highlighted the importance of breathing in all exercises and about the control in movement. He laid emphasis on the importance of rhythm in life and in exercise. Also, he talked about how all the asanas were inspired by nature, from vrikshasan to vajrasana. There was also some knowledge shared about the benefits of different ‘mudras’. Professor Rai also assisted the participants with various yogic positions. 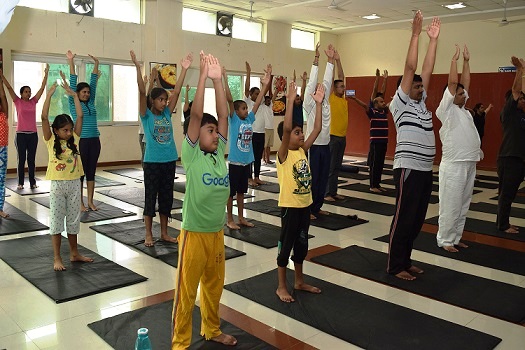 After the completion of more than 15 yogic asanas and pranayam exercises, Swamiji concluded the session by making the participants take a pledge to be health-conscious and also make the others aware about health-consciousness. The Director then informed the participants about the upcoming book co-authored by him and Swamiji. The event concluded with the distribution of prizes to the top 3 most disciplined practitioners during the event.

IIM Indore Mumbai Campus also celebrated the International Yoga Day early in the morning when the participants and staff members gathered at 6.15 AM. The trainer Darshana along with her team from the Arena Gym encouraged the participants for performing yoga on a daily basis. The event started with introduction of the distinguished heritage of Yoga and its history in India. The trainers discussed about various kinds of yoga and its importance in day-to-day life.

Beginning with the charm of artistic yoga after warming up, the participants then descended to traditional yoga, and tried some challenging aasanas. Trainers constantly guided by demonstrating the postures and correcting the participants time to time.

The event concluded with various yogic games which were thoroughly enjoyed by all the participants. This was followed by relaxing and chanting OM for the closure.