A panel composed of Professor Dibyadyuti Roy, Faculty, Communication and two IPM students Sreyan Chatterjee and Shivangi Soni presented three papers at the Massachusetts Institute of Technology (MIT’s)  Media in Transition conference that was held from May 16-18, 2019 at MIT Boston, USA. The conference was organized jointly by MIT’s Comparative Media Studies Department and their Writing Programme.

This year the conference—in its 20th year—was themed around the topic of ‘Democracy and Digital Media.’ The panel from IIM Indore, titled ‘Interrogating Caste, Democracy and Digitality in India,’ comprised of individual papers by Professor Roy, Sreyan and Shivangi. All the three papers emerged out of a research project the IPM participants have been doing under the mentorship of Professor Roy, since early 2018. 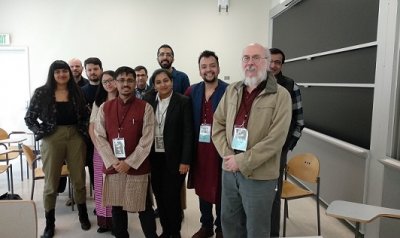 The panel highlighted how representative media discourses—from traditional to new media platforms—problematize accepted histories or definitions of “Dalit” and “Dalitness,’ allowing for newer models of inquiry in the digital age.
The panel was extremely well received and was attended by many distinguished academics including Professor Henry Jenkins and Professor William Uricchio, who had established the Media Studies Program at MIT.

IIM Indore team congratulates the panel for their outstanding performance at the MIT and wishes them luck for their future endeavours.