Indian Institute of Management Indore (IIM Indore) has received Rank 5 in the Eduniversal Rankings 2020 and Rank 3 in the 4 Palmes of Excellence Category in the Central Asia Region—under the top business school with significant international influence. The awards were announced at the annual Eduniversal 3-D World Convention (EWC) 2020. Every year, during the EWC, the Eduniversal Awards Ceremony awards the Top 3 Business Schools from each of the 9 geographical zones. These zones include Africa, Central Asia, Eurasia and Middle East, Far East Asia, Latin America, North America, Eastern Europe, Western Europe and Oceania. The rankings are based on the results from the academic peers who participated in the annual Deans’ Vote survey. 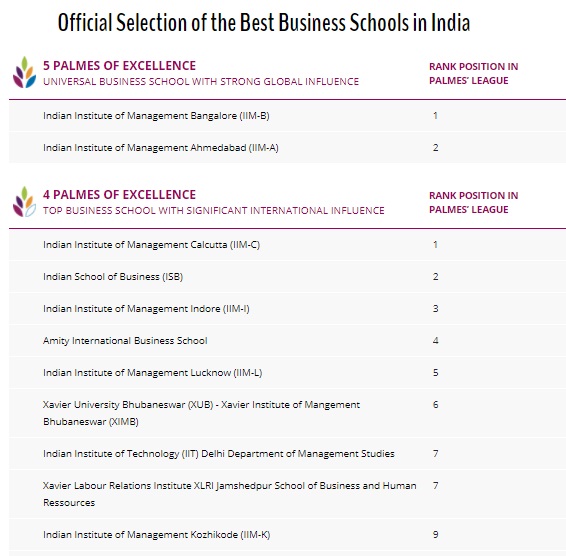 ‘We’re delighted to be on Rank 5 in the Eduniversal Rankings 2020, with 3rd position in the 4 Palmes of Excellence category. Now we will aim to get into the 5 Palmes category’, said Professor Himanshu Rai, Director, IIM Indore. IIM Indore is the second institute in the country with a Triple Crown to receive the three prestigious international accreditations—AMBA, AACSB and EQUIS. We already have more than 35 foreign collaborations and we look forward to providing contextually relevant and world class academics to our participants, he added.

The ranking is conducted in three steps which includes the official selection of 1000 best business schools from 154 countries; The Palmes of Excellence Awards to each of the 1,000 ranked schools and finally, the most important is the Deans’ Vote—which allows to take into account the expertise of the deans of the best business schools worldwide.

About Eduniversal: Eduniversal Group is a global leader in higher education information. They aim to provide students worldwide with the tools to find the best education opportunities. Eduniversal’s widely recognized academic rankings are the centrepiece of a global ecosystem of websites and services. Headquartered in Paris, Eduniversal is a global ranking and rating agency specializing in higher education. The company has established strong expertise in evaluating academic institutions and programs in France since 1994, and internationally since 2007.