Bringing laurels to the Indian Institute of Management Indore (IIM Indore), a five-participant team of IIMI participants has emerged as the Global Winner of the Institute of Management Accountant (IMA) Student Case Challenge 2022. The team comprising Aveek Choudhury, Ishan Anshul, Prikshit Saini, Rishu Raj, and Samriddhi Choudhury won the finals, competing with over 105 universities throughout the event. The universities were from four global regions – India, South East Asia, Middle East & Africa, and Europe. 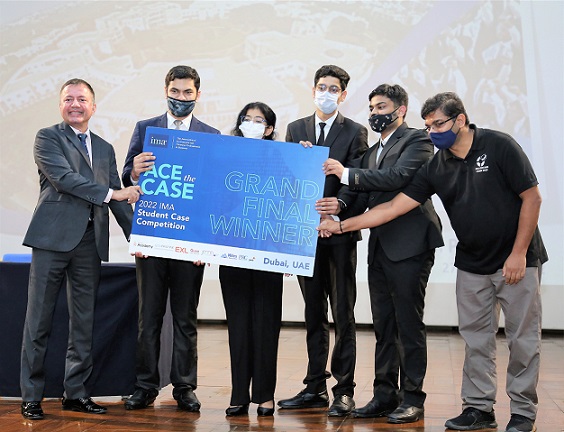 Prof. Himanshu Rai, Director, IIM Indore, congratulated the winning team for their outstanding achievement. ‘I heartily congratulate the winning team on this occasion. IIM Indore is always eager to offer opportunities, mentor, and encourage its participants for whatever they wish to achieve. The team has made us proud, and I wish them all the best for their future endeavors’, he said.

The members of the team noted that throughout the competition, they were in different cities as they had their internships. While Aveek was in Guwahati, Ishan was in Patna. Prikshit, Rishu, and Samriddhi were in Chandigarh, Agra, and Delhi, respectively. The team prepared for and won all the previous rounds in online mode. They prepared for the international round in online mode as well, and came together for the first time during the finals only. Sharing information about the various rounds of the competition, the team said that India was divided into three regions, and two teams were shortlisted from every region. These six teams competed in the semi-finals, the national round, and the IIM Indore team won the nationals. After that, the team represented India in the finals in Dubai.

The case was based on a Singapore-based indoor sports & recreational facility named Cage. The case revolved around improving the efficiency & profitability of the venture. Cage faced issues like low female participation, low retention rates, and inefficient capacity utilization at specific locations. ‘We based our solution on digitization, marketing campaigns to target female customers, and developing loyalty programs. The solutions were backed by robust cost accounting, financial accounting, and time value of money analysis. We also looked at developing incentive programs for the General Managers to incentivize them to perform better’, said the team.

IIM Indore congratulates the winning team for their accomplishment.