With its mission to remain socially conscious and develop socially conscious leaders and managers, IIM Indore has taken yet another step to contribute to the well-being of the society; while its alumni have joined hands to help the needy find plasma donors during these times of crisis. 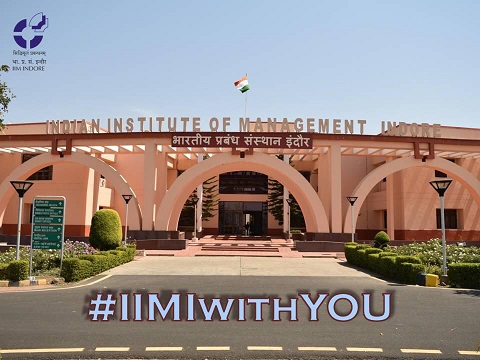 Under its Institutional Social Responsibility (ISR), the Institute has decided to distribute 200 lunch and 200 dinner packets every day to the patients in the nearby hospitals and the police personnel deployed in both the police stations in the area. Sharing his thoughts about the initiative, Professor Himanshu Rai, Director, IIM Indore said, ‘We at IIM Indore have always strived to make a positive impact on the society in general and we have now embarked on a mission of reaching out to the sick and needy. In these times, the hospitals are full and patients cannot meet their family members. Hence, to ensure that they receive nutritious meals, we will provide food packets to all the patients undergoing treatment in the nearby hospitals.’ We will also be providing packed meals to all the police personnel in the police stations in our neighbourhood as a small gesture of gratitude, he added.

He also appreciated the alumni group of 15 participants from the Five-Year Integrated Programme in Management (IPM), who through their venture ‘NeedPlasma’ have been able to help more than 525 patients by matching them with their respective plasma donors yet, with a volunteer base of more than 500 people. The initiative started as a single person connecting donors and recipients in June’20 in Delhi and has now expanded nationally in the last three months. According to the founder Prashant Saini, (IPM 2013-18) the initiative’s primary focus is to motivate and encourage people to step forward and donate plasma as there is an acute shortage of plasma donors. The group has come up with an innovative volunteer-based model which operates on the principle of micro influencers and makes the donation process more personal.

‘The number of donors has steadily been on the rise, but the number of requests still outnumbers the number of donors by a margin. There are a lot of fears and concerns when it comes to donating plasma among the people and also a certain set of conditions like heart/lung/kidney diseases, pregnancy, etc make potential donors ineligible which brings the number of actual donors further down’, said Palak Agarwal (IPM 2013-18) and Ankit Gupta (IPM 2015-20).

So far, they have received more than 8000 requests in the last month itself, and in Indore particularly the donor to recipient ratio is 1:8 thereby indicating the critical need for the covid survivors to come forward for the cause. Those interested in donating or volunteering can register themselves at needplasma.in or any other organisation working towards plasma donation.

Previously, the security guards of the Institute also volunteered as Special Police Officers in the nearby police station during the lockdown. The institute also conducted a webinar series to create awareness about the COVID19 pandemic, mental health and managing anxiety; and collaborated with the State Government to create video modules for the school teachers of the government schools to help them manage their stress and time during online teaching. IIM Indore seeks to be contextually relevant and is and will always be eager to contribute to the nation building.