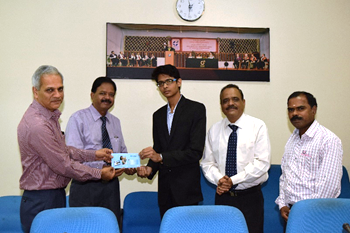 Writing Competition organized by State Bank of India (SBI). SBI had organised this competition among various academic institutions such as IIM Ahmedabad, Calcutta, Lucknow and Indore under its celebration of the Vigilance Week, on the topic ‘Preventive Vigilance as a Tool of Good Governance’. Kabir has also received a cash prize of Rs. 3000. He was felicitated by Mr. R.P. Raharia, DGM Vigilance, SBI & Professor Ganesh Kumar Nidugala, Dean Academics, IIM Indore on February 26, 2016. On this occasion Mr. Raharia mentioned that the initiative had been instrumental in creating awareness among the youth about need and importance of central vigilance.