Industry Interface Programme (IIP) run by IIM Indore facilitates students to complete live projects under the mentorship of industry partners and faculty members of IIM Indore. IIM Indore’s connect with the industry has grown tremendously over the years.

The Chair of Industry Interface Office, Professor Abhishek Mishra lauded the students for their efforts in the live projects this year with  more than 99% groups either meeting or exceeding expectations.

The meet started with a welcome address by Professor Rishikesha T. Krishnan, Director, IIM Indore followed by a speech delivered by Mr. Manish Kumar, Managing Director, National Skill Development Corporation. He emphasised the importance of skill development in the country especially in bringing members of insurgent groups back to the mainstream. He talked about how between the 90s and now, India entered the growth phase and how the growth is only going to increase over the next few years. ‘India’s manpower must be skill-ready for an impending upturn in the economy in the coming years’, he said. He elaborated on why government support in skill development is imperative for the economy. 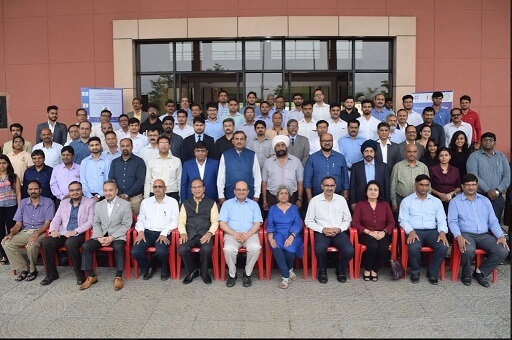 Mr. Manish Kumar’s address was followed by that of Mr. Sumant Sood. As the Head of the Innovation team Titan Company Limited he enlightened the audience on the importance of innovation given by Titan, the fifth largest watch manufacturer in the world. Titan has redefined the definition of innovation over the years and encourages a process flow of “Think Differently, Do Differently, Unlike any other”. He also introduced the Untangle Innovation Toolkit adopted by Titan.

Mr. Tomio Isogai, Ex-Managing Director, Sharp India Limited spoke at length about the Japanese way of working that focuses on sorting, systemising, shining, sanitisation and self-discipline which have been the reasons for the success of the Japanese model. He explained that by 2030, countries like India will have a higher share of younger population than Japan and the latter could use the skill of the Indian population to its advantage via a strategic business partnership with the country. He reiterated the importance of combining the Indian philosophy of ‘Jugaad’ with Japanese systems for the development of both countries.

The Industry meet ended with a felicitation of the industry mentors and students for their efforts during the Live projects. The Industry Interface office hopes to maintain and attract new alliances with industries in and around Indore.