The inauguration of the annual Industry Meet took place on July 27, 2019 at IIM Indore. The Chief Guest for the meet was Mr. R.S. Sachdev, COO, VE Commercials.

​He noted that IIM Indore has Industry Interface Programme which is now elective for the PGP participants, wherein they work with the industries in live projects. ‘This year, we’ve also introduced Industry Consulting Module for the EPGP participants, and are making changes in the IIP soon’, he said.

​Mr. R.S. Sachdeva then delivered his key note address on the topic—‘Leveraging Technology & Innovation for Competitive Advantage’. Sharing a quote by Peter Drucker, he said that marketing and innovation are the only two things required for the success of a business. He then shared how innovation and technology has brought a change in automobile sector. ‘In the coming years, axle load will be increased, there would be more electronic vehicles with diverse and quick changes in auto sector’, he said. He noted that the battery prices are also declining and automobiles are now becoming low maintenance— bringing shift in lifestyle.

Mr. Amit Bhatnagar then delivered a keynote speech on Advances in TV Attribution: Measuring Sales- Advertising Relationship. He said that companies spend a lot on advertising every year and if they save half of that and add it, it would be a big saving. Discussing about ADBUG model, he said that earlier, relationship between sales and advertisement was proportional. But after sometime sales didn’t grow. However in today’s scenario, it’s not the same. Hence came the Spike model which uses analysis between online clicks and TV Advertisement together. However, this model isn’t also working considering the less number of clicks on website. ‘It’s time to come up with a new model where the size of the window is increased and helps in identifying the baseline sales in a better way. A way which would have long term impact’, he said.

Q: What are the challenges in MSMEs?

Q: How are people or employees becoming enhancing assets in this sector?

Mr. Gera noted that the policy makers and the government need to make the HR become assets. Ms. Juneja said that there should be training sessions and workshops for enhancing the employees’ skills.

Q: With AI and ML coming up, can we future proof the labour?

Mr. Isogai said that in future, AI and ML would be replacing humans, but jobs might be still available for humans. Mr. Bendigiri agreed and noted that machines can replace humans but won’t embed feelings in the jobs they do, for example content writing needs feelings.

Q: Can India’s jugaad and Japan’s giants work together for enhancement in MSME?

Mr. Isogai said that Japan is driven by big corporations supported by SMEs. In the coming years, India’s jugaad may help in providing immediate and cheaper solutions to the problems —which can be backed up by Japan.

Q: Tier 1/2/3 cities also have challenges in MSMEs. Do they have any benefits?

The panellists said that Tier 1 cities are just looking for ease of working and doing business. They’re closer to the rich consumers, have easier access to education and knowledge. However in the times to come, Tier 2/3 cities would be more empowering for MSMEs since Tier 1 cities have pollution and population.

Q: How educational institutions can help in empowering MSMEs?

The panellists noted that bridging the gap between academia and industry is one of the biggest challenges. Both sectors can come together and understand the challenges faced by each, this would help in enhancing both of the sectors.

This was followed by the felicitation of all the industry members present by Professor Himanshu Rai, Director, IIM Indore.

The awards were also given to the PGP participants who performed exceptionally well in the Industry Interface Programme.

The IIM Indore NASMEI 2019 Summer Marketing & Information System Conference Awards were also given. The awards are as follows: 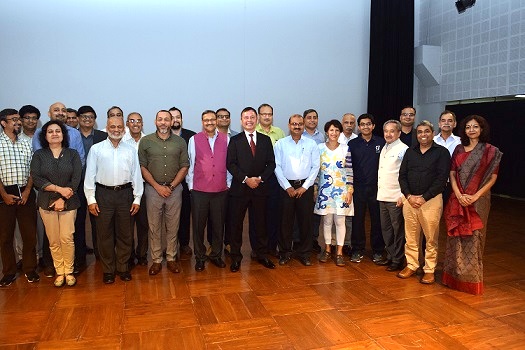 The meet concluded with a vote of thanks by Professor Abhishek Mishra, Conference Chair.