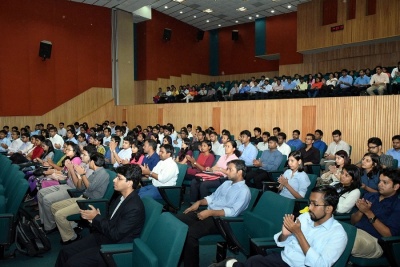 Mr. Parameswaran pointed out that in today’s scenario, information sharing and awareness is more about Social, Logical and Mobile learning. Citing examples of some of FCB Ulka’s well-known clients such as KANSAI Nerolac, Bausch & Lomb, Nivea, Amul and Oreo, he gave a glimpse of how companies are designing their advertisement campaigns around digital media. He accentuated his points with videos that not only described some of the successful ad campaigns that FCB Ulka has been a part of, but also the thought process in designing the campaign.

Be it Oreo’s Anniversary special marketing campaign or Nivea’s tech oriented Sun screen product ad, Mr Parameswaran highlighted the importance of engaging the consumers. The talk was followed by a Q&A session wherein curious participants sought inputs from the guest regarding various nuances of marketing.