The prestigious sports fest of IIM Indore, Ranbhoomi was held at IIM Indore from February 5-7, 2016. Teams from all across the nation gathered at the Institute to be a part of this fest, featuring over 500 participants from over 50 prestigious institutes of India. The fest experienced a footfall of over 5000 in three days.

The fest began with full enthusiasm and sportsman spirit at the Institute on with the grand inaugural ceremony on the first day, marking the presence of Major General Harvijay Singh as the Chief Guest. Professor Ganesh K. Nidugala, Dean Academics, IIM Indore welcomed the guests and noted that IPM students have always been successful in organizing such events and have the ability to deal with the management.

This was followed by the address by Major General Harvijay Singh, who extolled the students to play with full dedication, loyalty and ethics. Sharing his experience in the army he mentioned that being a soldier, winning isn’t everything. It is the only thing. ‘A soldier can’t step up and win a battle till he is fearless and determined. The same goes for every competition you take part in’, he noted. He encouraged the participants of Ranbhoomi’16 to have the motto of- ‘You can, you must and you will win’ and believe that no matter who wins, they all are winners, as they had the courage to at least participate in the competition.

This year again, the flagship events like triathlon, power lifting, arm wrestling and swimming  were a huge draw and a great emphasis was also being given on different events like arm wrestling, street football, gully cricket, foosball and much more which gave participants an opportunity to bring out the best sportsmanship while enjoying the new sports.

At the same time, a huge campaign called FIGHT FOR GLORY was also organised to create awareness about neglected sportspeople of the country. The students covered stories and used social media to raise the cause of sportspeople who had achieved a lot for their nation, but now have to resort to menial jobs and struggle to make their ends meet.

The closing ceremony had the one of the most amazing cricketer of the Indian Cricket Team, Mr. Gautam Gambhir as the Guest of Honor along with Professor Rishikesha T. Krishnan, Director, IIM Indore and Professor Ganesh K. Nidugala, Dean Academics, IIM Indore as the dignitaries. The ceremony began with the welcome speech delivered by Professor Krishnan who congratulated the IPM students for successfully being able to conduct the fest so efficiently and productively. 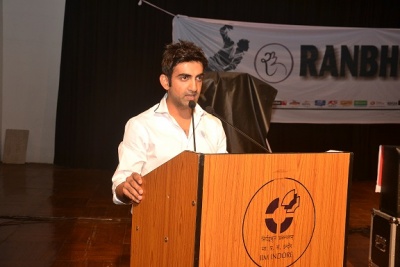 Mr. Gautam Gambhir began his talk sharing his personal experiences of his previous visits to Indore. ‘This is the first time I have visited any B-School in the country, and I am happy to be at IIM Indore, which is one of the greatest management institutes in the country’, he mentioned.

Discussing about management education, Mr. Gambhir said, ‘The best manager in the world is a mother, I believe. She doesn’t own a laptop all time, but she has better time management. She doesn’t make presentations on power point, but she is the best finance manager. No matter what is the situation of inflation in the nation, she makes sure to put a little amount in the savings box she has for her family. She never discriminates between the talented and the non-talented child and she is the perfect leader who without thinking about self-popularity, pushes you ahead and stays behind you for your support’.

Mr. Gambhir said that we as grown-ups are turning into robots. We know what is going on in the world, but we don’t know how our neighbor is doing these days. ‘We are making a mistake while living in the virtual world, running behind social networking ‘likes’ and ‘comments’ and fame. Instead we need to look up from our smartphones and live the real life, become a passionate human being’, Mr. Gambhir said. He encouraged the students to accept failures, as it is okay to fall. But then you must stand up, dust off your clothes and again start moving towards your new goal, he concluded.

This was followed by prize distribution ceremony, in which winners from all the sports were given medals and trophies.

The fest played a great role in bringing out the best from these young athletes, as they competed to be victorious. An encouraging thing was to see how there was immense female participation this year, showing rising interest and opportunity for women in sports.

The fest concluded with the mesmerizing and harmonious performance by the Band Raahie, who enthralled the participants in the Musical Night.