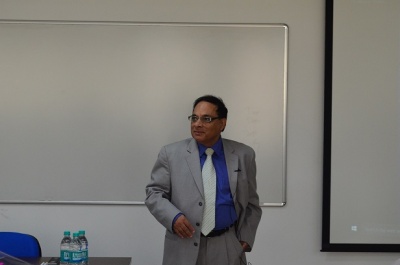 While discussing with the participants about changing scenario in the field of digitalization, Mr. Sawhny cited various examples from around the globe. ‘With 7.2 billion mobile phones in the world (which is more than the world population), the digital consumers are not necessarily the ones belonging to the developed nations. The pace at which the things are changing today is faster than ever. And in order to sustain, the organizations need to catch up with the velocity of the change’, he mentioned.

Mr. Sawhny noted that the consumers have become hyperaware, and there is a huge paradigm shift in consumer behavior.

He also observed that the most sustainable differentiator today is the consumer experience and the traditional lines between the organizations are blurring and the traditional idea of core competencies does not exist anymore. Big data is what is driving this transformation. Since knowing the consumers is of prime importance, organizations like e-Bay have employed thousands of data scientists to analyse consumer behavior. The new kind of leaderships, said Mr. Sawhny, would have leaders who focus on intangibles like vision, brand and customer experience. Mr. Sawhny concluded by motivating the participants, who will be leaders in the times to come. With respect to the organizations, he said it’s not about the experience but relevance in the field. Finally, he said that leadership is about striking the right balance among work, home, community and self. The session was followed by an interactive talk where the participants asked various queries.