The seventh batch of Integrated Programme in Management (IPM) began at IIM Indore on August 1, 2017. A total of 121 students registered for the programme. The three day induction progamme aimed at familiarizing the students with the Institute, curriculum and faculty and facilities. The inaugural ceremony was graced by Shri Shivshankar Menon, Former Foreign Secretary. Professor Rishikesha T. Krishnan, Director, IIM Indore and Professor G. Venkat Raman, Chair, IPM were also present on the occasion.

The event began with the lamp lighting ceremony by the guest and a few participants from the new batch. Professor Krishnan welcomed the new batch and noted that it is always exciting to have new students on campus. He said that the new curriculum of IPM is designed in a manner which will help the participants emerge as good leaders and managers. He said that the previous two batches of IPM have graduated and the students are performing well in the corporate sector. ‘The current economic scenario of India is pleasant and I believe it will continue to grow in the coming years. This is a great time to learn and enter the workforce and make significant contribution to the nation’, he concluded.

Professor G. Venkat Raman then gave an overview of the IPM curriculum. He said that the new curriculum includes the ‘Pillars’—Economics, Mathematics, Statistics and Social Sciences along with the ‘Enablers’ namely, Communication, Information System and various Bridge Courses like Business History, Government & Society, Basics of Accounting, etc.; and the ‘Enhancers’—which include language and philosophy, arts, drama, music, sports and yoga as well. He noted that the curriculum will help in excellent overall development of the participants.

This was followed by the Inaugural Address by Shri Shivshankar Menon. He began his talk mentioning that the world today is divided into two categories—one which includes culture, liberal arts, humanities and all the classical subjects like history, geography, etc.; and the modern category which includes hard sciences like physics, chemistry, maths, etc. which focus on hypothesis and scientific methods. Having interest in some other field, other than your own, helps you become successful manager in a better manner, Shri Menon addressed the participants while sharing examples of personalities like Vikram Sarabhai and Homi Bhabha, who were good in other activities as well apart from their own fields.

He encouraged the students to start focusing on something innovative while studying interdisciplinary courses. ‘It is important to integrate both the divisions’ knowledge and learn, and then contribute to the society as a whole’, he concluded. His talk was followed by a Q&A session.

The event also witnessed distribution of Certificate of Academic Excellence to IPM 2014 Batch students by the Chief Guest and the Director. The following students received the certificates—

The second day of Induction Programme began with a session on disability by Ms. Rama Chari. This was followed by a talk on ‘The Life Ahead’ by Dr. Sameer Golwelkar and Dr. Sonia Golwelkar (Consulting Psychologists). Dr. Golwelkar began his talk mentioning that the young minds are like the fresh soil ready to cultivate. These students would be leading various organizations in the coming years and their effective skills would depend on the seeds sown at this time. Discussing the difference between living and surviving, Dr. Golwelkar noted that we need to develop a bridge between our skills and compassion which would help enjoy life to the fullest. The participants also attended counselling sessions by Ms. Prachi Agarwal, Counsellor, IIM Indore.

The highlight of the day was a talk by Mr. Ashwani Dahiya, Global Chief Talent Officer and Head of HR (Corporate), Cipla. He spoke on the topic—‘The Importance of Positive Psychology and Resilience in Today’s Challenging Times’. ​ ​Mr. Dahiya while mentioning some facts and figures said that ‘Studies state that around 37 percent of people working in corporate sector are energized. But if a person is negative, chances of attaining success drop by 38 percent as compared to a positive person’. He encouraged the participants to keep the energy level high with positive thoughts by—‘P.E.R.M.A.’, i.e. developing ‘Positive’ Emotions, being focused and involved i.e. ‘Engagement’; looking for positivity in ‘Relationships’; finding the ‘Meaning’ of life and trying to value the ‘Achievements’. Noting that energy is always 4 dimensional, Mr. Dahiya advised the participants to be physically energized, emotionally connected, mentally focused and spiritually aligned—which would help them become a better person and be successful in life.

The day concluded with briefings on Safety, Security, Library, Gender Sensitivity and Facilities and Systems of the Institute to familiarize the participants. A briefing on Government of India directive on Prevention and Prohibition of Ragging also took place.

The third day witnessed a Guest Talk by Mr. Saikat Mirta, Director, Trust and Safety, Google. He spoke on the topic—‘Bon Voyage’ which revolved around the theme- a compass to navigate in a dynamic and changing world. Sharing learnings from his experiences, he told the fresh batch that this is the beginning of new journey. He encouraged the students to renew self, reset the goals, unlearn and relearn; and fasten the seatbelts to start a new chapter of life. ‘All the things we did to reach a certain goal or a point—if you keep doing that, you won’t move to the new point. There may be surprises and bumps in the road ahead, but you can always dream big, stay ambitious and try to push the boundaries’, he said.

In order to familiarize the new batch with the faculty members, an interaction session was also conducted. The Induction Programme concluded with a session on –‘Knowing Yourself and Moving Ahead with Self’ conducted by Professor Gopal Mahapatra, Professor Urjani Chakravarty, Professor Shruti Tewari and Professor Srihari Sohani. The session had various activities which focused on self-depiction, projection and exploration. 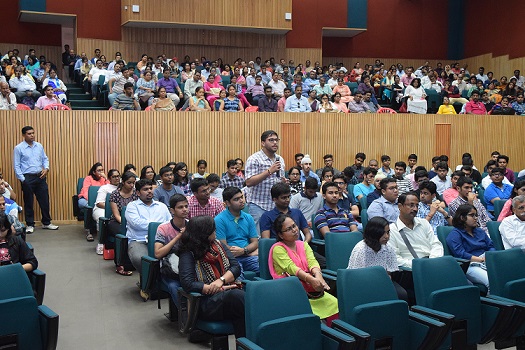 The three day programme helped the participants get acquainted to the campus, infrastructure, and curriculum; and know their faculty members for the coming five years. ​