Smt. Arundhati Bhattacharya, Chairperson, State Bank of India (SBI) has been appointed as the Chairperson of the Society and Board of 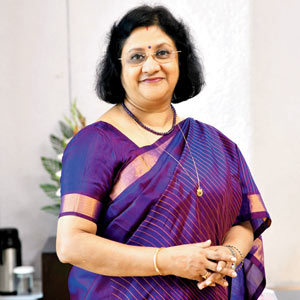 Governors of Indian Institute of Management Sambalpur (IIM Sambalpur). Mentored by IIM Indore, IIM Sambalpur is among the six new IIMs which the Government of India approved to establish in its Budget 2014-15, presented in the Parliament of India on June 24, 2015. The other new IIMs or the 3rd generation of IIMs are IIM Vishakhapatnam (Andhra Pradesh), IIM Bodh Gaya (Bihar), IIM Sirmaur (Himachal Pradesh), IIM Nagpur (Maharashtra) and IIM Amritsar (Punjab).

Smt. Arundhati Bhattacharya will be the Chairperson of IIM Sambalpur for the next five years, starting from January 15, 2016. She is the first woman to lead an India-based Fortune 500 company. She joined the SBI in 1977 as Probationary Officer and has held several positions during her long career at the largest bank of the country.

In 2015, Smt. Bhattacharya was named the 30th most powerful woman in the world by Forbes. In the same year, she was ranked among the top 100 Global Thinkers by Foreign Policy magazine and the 4th most powerful women in Asia Pacific by Fortune. Smt. Bhattacharya was named the first female chair at the State Bank of India in 2013 after nearly four decades of service.