Professor Kamal K. Jain conducted a workshop on the topic ‘Win-Win Conversation’ organized by Indore Management Association (IMA) on May 12, 2016. The workshop was organized as a part of IMA’s Develop You USP Series at Hotel Sayaji, Indore. 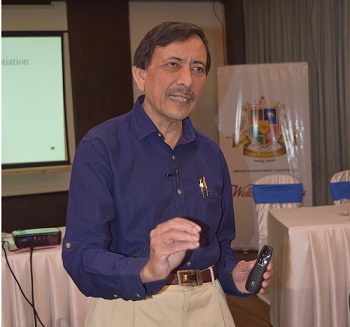 Professor Jain gave several practical tips to the participants on how to emerge as a winner in negotiation using the principle of win-win. Using examples, illustrations, anecdotes, stories and clips from Bollywood movies he explained the intricacies of negotiation in a very lucid manner. He also explained technique of integrative negotiation in which he said that expert negotiators do not take the size of pie fixed; instead they keep on exploring how to expand the size of the pie which ultimately becomes the source of win-win negotiation.

‘The objective of a negotiator should not be to force the other side to accept all the conditions by deceptive behavior, aggression, use of force and power. This may help you getting a ‘yes’ from the other party;  but it can never inspire others to sincerely and faithfully carry out those agreements where both the parties need to work together for the success of the deal, for example a supplier and a manufacturer’, Professor Jain mentioned. He also discussed how solving the problems faced by others can help one solve his own problem as well. He advised that before taking any crucial decision, one should discuss and listen to the second person’s point of view as well. 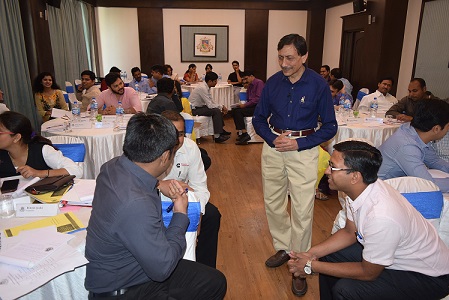 He concluded his talk by discussing the role of framing in negotiation. ‘90% of customers are satisfied with our service will not create similar kind of feeling if you say 9 out of 10 customers are satisfied with our service. Real numbers tend to have a much stronger impact on people. When we present ‘90%,’ our brain is calculating, at a high speed the difference between 90 and 100, which, will be 10. Now, when we express ‘9 out of 10,’ our brains will ‘see’ the number 1 as the final result. In this case, the ‘smaller’ difference means the ‘large’ majority is satisfied with our work’, he explained.