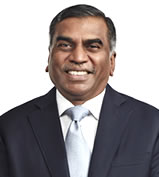 Shri M M Murugappan, a fourth-generation member of the Murugappa family, was the Executive Chairman of the Murugappa Group Corporate Advisory Board from February 2018 until November 2020. He also Chairs the Boards of Cholamandalam Mitsui Sumitomo General Insurance Company Ltd. and Murugappa Water Technology & Solutions.

Shri Murugappan is the Chairman of the board of Cyient Ltd. (Hyderabad) and an independent director of Carson Cumberbatch (Sri Lanka). He retired from the Board of Mahindra & Mahindra in August 2020 after serving multiple terms. He served on the Board of Governors of IIT Madras for six years till November 2011 and has enabled many industry-academic partnerships. He now serves on the board of the IIT-Madras Research Park and is a mentor to many companies incubated there.

As a Trustee of the Group’s AMM Foundation, he is actively involved in the development of various citizenship initiatives, particularly in education, health care, performing arts, and sport.

IIM Indore is honored to have Shri Murugappan as the Chairperson of the Society and Board of Governors of the Institute. We welcome him as a part of the IIM Indore community.

IIM Indore also places on record the guidance received from Mr. Deepak M. Satwalekar as the Former Chairperson of BoG and the contributions made by him to the development of the Institute.