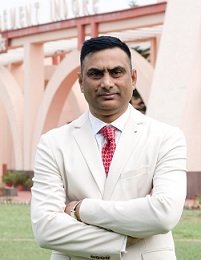 Dr. G Venkat Raman is currently Associate Professor in the Area of Humanities and Social Sciences, IIM Indore. He is also former Programme Chair of the five year Integrated Programme in Management since April 1st, 2017. He is one of those rare Indian academics who has pursued and completed his doctoral degree from China’s oldest and premier University, Peking University, Beijing. He has also worked in Beijing as a professional for two years and eight months. He is perhaps the only faculty among all IIMs to have a native speaker’s fluency in Mandarin.

Venkat is a PhD (Political Theory) from the School of Government, Peking University, Beijing. Earlier he had done his MA and MPhil from the School of International Studies, JNU, New Delhi. After completing his PhD from Peking University, Venkat worked as Business Development Manager in the Middle Management (M level-7) for Essar Steel’s Representative Office in Beijing. Thereafter an aspiration to be an academic brought him to India. In 2010 he relocated to India to join IIM Kozhikode as Assistant Professor in the Humanities and Liberal Arts in Management (area). He worked in IIM Kozhikode as Assistant Professor for four years and seven months. In the last few years he has designed and delivered courses like Business Ethics, Doing Business with China, Geopolitics and International Business at Post Graduate Level. At the undergraduate level he has designed and delivered courses like Political Theory, International Relations and World Politics. He has recently completed a project on BRICS countries under the auspices of a research grant awarded by the Indian Council of Social Science Research (ICSSR). The project was titled "BRICS: An Alternative Vision of Trans-regional Cooperation from the Global South on BRICS” (Brazil, Russia, India, China, South Africa).Earlier he has been awarded China Government Fellowship (2004-08), Nehru Memorial Fellowship in 2003, and Junior and Senior Research Fellowship in Political Science from the UGC, Delhi.

Venkat has also qualified as one of the Business Excellence assessors and has been part of the Business Excellence assessment under the auspices of the Confederation of Indian Industries. He has also been invited as a guest speaker by organizations like the Confederation of Indian Industries. He is also an Adjunct Fellow of the New Delhi based Institute of Chinese Studies. His areas of research interest are State-society relations in China, Global Governance and BRICS, and Business Ethics pedagogy. Two of the latest papers published by him are a paper on alternative ethics pedagogy and entrepreneurship in China. The paper titled ‘Integrative Live Case: A Contemporary Business Ethics Pedagogy’, (co-authored with colleagues Prof Swapnil Garg and Prof SnehaThapliyal), has been published in the Journal of Business Ethics (published online on 29th of March 2017). A paper titled ‘Individual Resources, Property Rights and Entrepreneurship in China’ has been published in the latest issue of the International Journal of emerging Markets (co-authored with Sreevas Sahasranamam).