IIM Indore Gets a Grant of Rs. 19.95 Crores to Establish CoE

Home » IIM Indore Gets a Grant of Rs. 19.95 Crores to Establish CoE

IIM Indore to Establish a Centre of Excellence on Campus,
Signs an MoU with the Ministry of Housing and Urban Affairs

IIM Indore is known for its efficient management, training, and world-class education. Taking yet another step to encourage cleanliness and hygiene measures, the institute has now joined hands with the Ministry of Housing and Urban Affairs, Government of India (MoHUA). The collaboration aims to establish a Centre of Excellence (CoE) at IIM Indore that offers the best class leadership and training for managing sanitation and waste initiatives across urban India. The MoU was signed by Prof. Himanshu Rai, Director, IIM Indore, and Ms. Roopa Mishra, Joint Secretary, MoHUA, on September 29, 2022, in Delhi. Honorable Minister Shri Hardeep Singh Puri unveiled the CoE during the Swachh Shehar Samvad and Tech Exhibition in Delhi. Mr. Manoj Joshi, Secretary, MoHUA was also present. 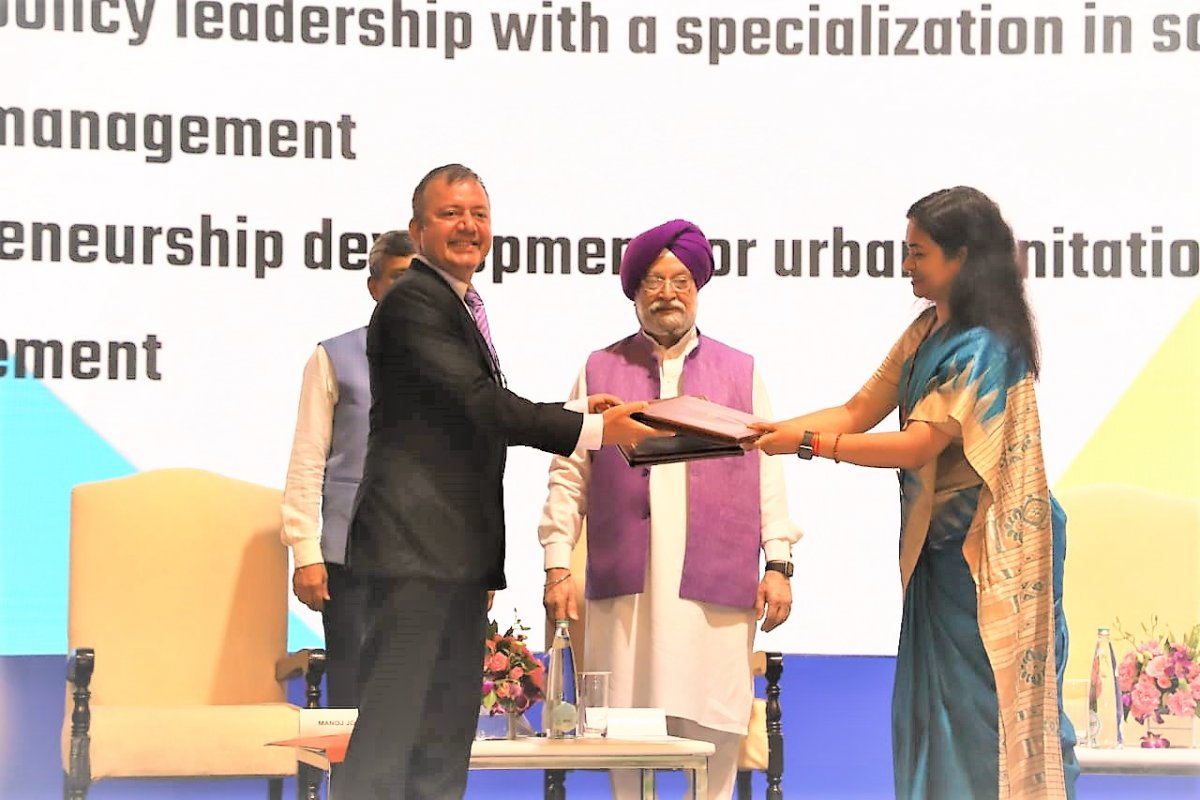 Shri Hardeep Singh Puri, sharing his views on ‘Jan Andolan’ and the significance of CoE, said that when youngsters with startups are able to start applying their minds and do an economic activity that will result in wealth generation – you are sure that it is a ‘Jan Andolan’. ‘There have been Centres of Excellence earlier too, but when they take a ‘Swachhata Dimension’ and start providing the highest of academic rigor, we realize that we are on the way to Aatmnirbhar Bharat’, he said. Congratulating Prof. Himanshu Rai on taking this initiative for the establishment of CoE at IIM Indore, Shri Puri said, ‘I am sure that your undertaking this venture will serve as an encouragement to others similarly placed to follow and join this noble process’.

Sharing details about the MoU, Prof. Himanshu Rai said that IIM Indore has received a grant of Rs. 19.95 crores from the MoHUA. ‘Indore has been the ‘Cleanest City’ for the last five years under the Swachh Bharat Survekshan. The city has established a milestone in cleanliness and sanitation, and the planning and execution strategy implemented by the administration is commended across the globe. IIM Indore aims to be a contextually-relevant institute, determined to contribute to nation-building. This MoU focuses on establishing a Centre of Excellence that will design and implement training and development courses for the political leadership, including mayors and ward councilors, to build their capacities, skills, and sensitivity. This training would strengthen their abilities to drive the initiatives for urban sanitation and waste management’, he said. Besides training, the CoE will also offer full-time and part-time programmes relevant to public policy, urban governance, and change management for administrators, managerial and executive cadre, and front-line employees of corporations and local bodies. ‘Our CoE will serve as a bridge between municipal corporations and local bodies, businesses, and service organizations. We plan to establish an incubation center in partnership with IIT Indore, and also offer advisory services on the utilization of funds and support from the corporate partners to the ULBs for delivery of municipal and civic services’ he said.

Ms. Roopa Mishra also expressed her delight over collaboration with IIM Indore. ‘IIM Indore is among the top business and management institutions in India and is the second IIM in the nation to receive three prestigious international accreditations. Situated in central India, the institute has played a significant role in developing the city and the state through various collaborations with the government and administrative bodies. The establishment of IIM Indore’s CoE is yet another initiative that reflects the dedication and determination of the institute to contribute to the nation’, she said. She noted that IIM Indore is known for its state-of-the-art infrastructure; thus, the CoE will be established in the IIM Indore campus with smart classrooms, offering world-class training. ‘The CoE will also conduct research in sanitation and waste management, and create a repository of the best practices in urban transformation’, she said.

The CoE will be under the direct administrative and academic administration of the Director, IIM Indore, and will work within the academic rules and regulations stipulated by the institute. MoHUA will aid the CoE for a period of three years. IIM Indore received the One District One Green Champion Award from MGNCRE in 2021 and the Silver at the AMBA BGA Awards under the CSR and Sustainability Category in 2021. The institute has also contributed to the Kanpur Smart City project and has taken initiatives to replicate the Swachh Indore Plan in Ayodhya.