Dangerous Divas—a team of PGP participants—Ritika Maheshwari, Sonakshi Samar and Sonam have won ‘The Hero Challenge Season 2’ contest conducted  by Hero MotoCorp during September-November, 2016. The National Final Round was conducted on November 8, 2016 at Delhi. Competing with 533 teams registered in the Scenario Planning Exercise and after stringent rounds, IIM Indore’s team reached the Grand Finale and bagged the Second Runner-up Prize along with a trophy and cash prize of Rs. 75,000. 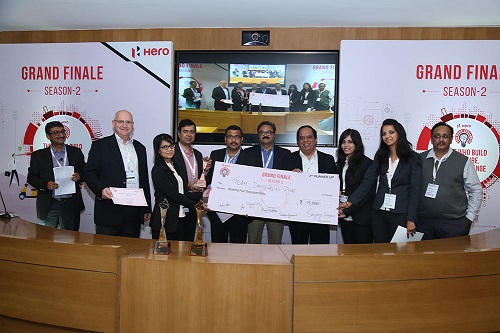 The team had to prepare a scenario plan for Hero MotoCorp in the automotive industry disrupted by technology innovations, wherein the team members identified various possible scenarios and defined a strategy in which all the scenarios fit. This was followed by the First Round submission on September 28, 2016, in which IIM Indore’s team was shortlisted for the finals.

IIM Indore congratulates the team for their achievement.