The second day of the Induction Programme began with briefings on Security and Safety, Prevention and Prohibition, Gender Sensitivity, Hostel and Student Affairs, Library and Plagiarism and IT Infrastructure of the Institute. The briefings helped the new batch get aware of the facilities of the Institute. The parents and the students also got an opportunity to interact with Professor Rishikesha T. Krishnan, Director, IIM Indore and Professor Ranjeet Nambudiri, Chair, IPM. 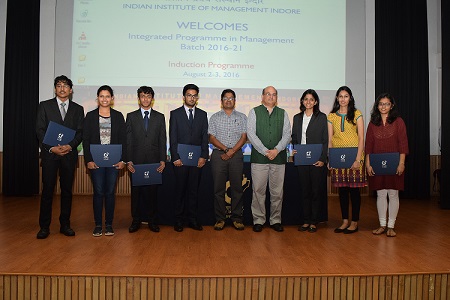 Distribution of ‘Certificate of Academic Excellence’ to the top performers of the IPM Batch 2013 also took place on this occasion.  The following students received the certificates:

The highlight of the event was the address by Dr. Jaimini Bhagwati, Ambassador, Ministry of External Affairs. Dr. Bhagwati spoke on the topic – ‘Role of Foreign Policy in Extending International Footprint of Indian Business’.

Dr. Bhagwati began his talk discussing the importance of economic diplomacies and how it has brought in changes in the Indian business scenario, be it in the terms of foreign trade or portfolio investments. ‘The world is becoming co-dependent after the advancements in technology. However, economic diplomacy is not restricted to just this aspect. It is an integral part of the foreign policy which gains importance after the game changing industrial economic reforms plus the devaluation of the Rupee in the year 1991’, he said. Discussing the bilateral trade in goods, Dr. Bhagwati said that in the year 2014 India’s two-way trade in goods with the USA was just 10.8% of what USA had with China. Similarly the trade with Japan was just 4.9% to that compared with what USA had with Japan. This explains that even if India had close relations with Japan, the trade relations were quite less.

Congratulating the new IPM Batch, Dr. Bhagwati said that there will always be crooks in the society, but the young people of the country ought to stay focused and find solutions to the issues arising. ‘Everyone is watching you, and they would only believe your credibility, when you interact with them and convince them, that the young Indian minds have a positive attitude with a hunger in their heart to achieve success’, he concluded.

The talk was followed by a Q&A session.

The two day Induction Programme, apart from helping the new batch get accustomed to the Institute, course curriculum and the faculty, provided  them encouragement and motivation to focus on their studies, learn as much as possible both practically and theoretically and enhance their talents and skills for a successful future, to help them emerge as young efficient leaders.