IRIS-Ranbhoomi, Central India’s largest Sports and Management Fest, is back with its 9th edition this year in offline mode after a gap of two years. It is one of the most awaited fests in India and attracts a combination of the most talented young sportsmen and some of the sharpest minds with sporting inclinations from all over the country. The fest has over a thousand people attending the event this year, with over 60k+ participants online. 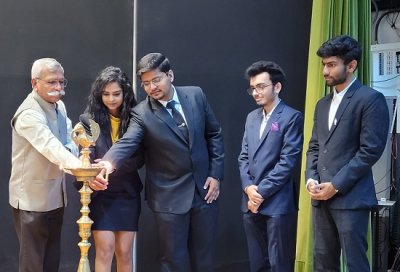 The Chief Guests of the event were Mr. Rahul Gehani, partner at the Everest Group, and Mr. Mukesh Ranjan, VP of IS at the Everest Group. The event was also presided over by the Chair of Student Affairs, Prof. Swatantra, and IIM Indore’s Chief Administrative Officer, Col. Dr. Gururaj Pamidi (Retd). Col. Pamidi called the fest a unique blend of experiences and wished the fest a grand success. Mr. Gehani and Mr. Ranjan spoke about the strong relationship between the institute and the Everest Group and wished for it to grow stronger. Mr. Gehani spoke about how IIM Indore was now a crucial cog in their recruitment efforts, a testament to the institutions’ high standards in faculty and students. Mr. Ranjan echoed the same sentiments and encouraged the students to enjoy their college life along with their studies and how events like these add to a student’s knowledge.

Ranbhoomi will hold a wide range of sports like Cricket, football, badminton, and the Fantasy Premier League. In addition,  the fest is proud to present ‘Ranneeti’, the management segment of the fest. Ranneeti will include events such as Case Studies, Crisis Management, Sports Marketing, and more that will pique the curiosity of many. Aside from these, there will also be fun and informal events such as mini golf, human twister, etc.

As part of pre-fests, Ranbhoomi featured the Corporate Cricket League (CCL) as one of its flagship events. Conducted from 8th-16th October, it featured some real nail-biting cricket matches. TCS emerged as the triumphant winners of the league, with WorldPay as the runner ups. Another pre-fest event was IIT v. IIM which was a 3-day event with multiple cultural and sporting events to induce competition and camaraderie in both institutes.

The highlights of the three days of extravaganza are the nights IRIS has planned for its audiences, with the king of comedy Samay Raina coming to knock our socks off on 11th November, followed by an electrifying EDM night on 12th November. Bollywood singer Neeti Mohan will also grace the event on the 13th with her presence to melt our hearts with her captivating voice and glamor and conclude the fest.

The previous fest was bedazzled over by Unmukt Chand, Bhaichung Bhutia, Major Gaurav Arya, and many other stalwarts as chief guests. The famous personalities who have performed are Standup comedians like Rahul Dua and Anubhav Singh Bassi.