A Guest Talk on the topic ‘China and India After the Financial Crisis of 2008’ was held at IIM Indore on March 6, 2017. Professor R. Nagraj, an expert on the Indian economy from the Indira Gandhi Institute of Development Research, Mumbai was the speaker for the talk. His talk revolved around the terms of the parallels that can 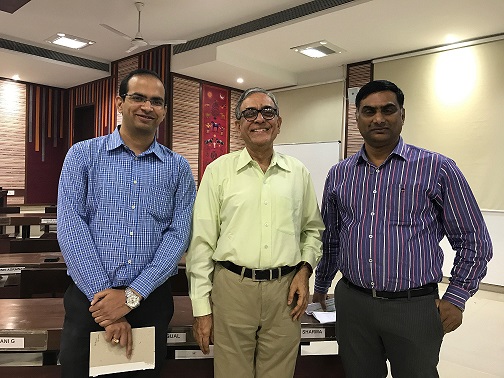 be drawn between the Indian and Chinese economies. He believed that even though politically and institutionally both the economies are on different planes, drawing such comparisons is still meaningful. He discussed whether these giant oriental economies –accounting for 18% of Global GDP in 2015 and one third of the world’s population – emerge as a significant node for global economic recovery.

He further noted that China has a fearfully high debt GDP ratio. ‘Real estate market is believed to be in ‘bubble territory’, despite official efforts to tighten the lending norms. On the other hand, India’s policy performance seems to indicate that we have witnessed an unprecedented decade long cycle of boom and bust, with growth resumed after Global Financial Crisis by the stimulus and capital inflows’, he said.

Professor Nagraj also discussed about China’s deteriorating growth rate and India’s economic turnaround with the excessive debt on the banking sector. His paper established that China needs to move away from housing and infrastructure investment to social sector investment and consumption led growth. In order to do this; the rules governing the distribution of fiscal resources between centre and the provinces will need to be redrawn to reduce the incentive of provinces to rely on land sale and real estate.

He concluded his talk saying that India has greater political stability and certainty because its market institutions are more rule based hence supportive of market economy. This is why we see that though India’s corporate debt is very large, it is not as high when compared to other emerging economies.

The talk was followed by a Q&A session.