The event inaugurated with the welcome address by Professor Rishikesha T. Krishnan, Director, IIM Indore. Recollecting the times when the establishment of IIM Indore was announced, Professor Krishnan mentioned about the excitement and anticipation created among the entire education sector in the country. ‘Everybody pondered upon how the new IIMs would be different from the existing ones and what steps they would take to enhance the scope of management education in the country’, he said. Looking back at the last 20 years, it is clear that management education has not only progressed but also evolved a lot drastically, he said. Discussing about IIM Indore’s journey, he noted that the Institute today has matured and achieved many laurels in the past years, right from launching the Five Year Integrated Programme in Management to having the largest number of students on campus as compared to other IIMs. ‘Along with significant achievements to claim, the management education also has the challenge to stay contextually relevant with the economic and business scenario and ensure that it keeps up with the changing environment and contributes to the country in a significant manner’, he concluded.

Shri Gopalakrishnan then delivered the Foundation Day Lecture on the topic—‘Maximising, Not Balancing, Work Life Through Six Lenses’. Discussing about his graduating days, he said that management education those days was a bit flaky, and parents preferred that their children rather study at IITs and get ‘proper education’. ‘After a few years, management education developed and grew into a matured flower, and the journey of management education since then has been quite pleasant’, he said. The education today focuses on producing competent managers who are skilled, lear 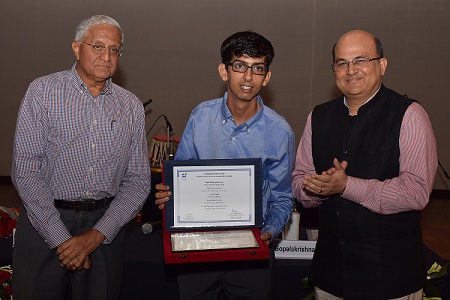 ned and talented, but can they be considered ‘happy managers’; he questioned. Mentioning that the young managers today find stress as a big problem, he said that the work-life balance is getting disturbed. ‘Our right eye can be considered as relationships, or family; and our left eye is like work. We can’t just dilate one eye and try to get a clear vision, we need both the eyes, in a properly dilated manner’, he added. And that is how work-life should be rather maximized, not balanced. He noted that our both the ‘eyes’ have six lenses which need to work together namely, Purpose—as to what needs to be done with life; Maturity—speaking what is in your mind; Courage—to be able to open your mouth and doing what you want; Trust—developing trust among each other; Defining success—and getting a clarity about what success is to you and Luck—which plays an important role. ‘As and when any person faces any situation, these six lenses adjust themselves accordingly and hence, no two persons can see any similar situation in a similar manner’, he concluded.

This was followed by an award presentation ceremony, i.e. Certificate for Academic Excellence to top 5 percentile of the combined batch of the PGP (Batch 2015-17) and IPM (Batch 2012-17) participants based on their academic performance in the year 2015-16. Certificates were given to 25 students.

This was followed by an award presentation ceremony to felicitate the following five staff members of IIM Indore who performed exceptionally well in the year 2015-16.

A felicitation ceremony also took place for the employees of IIM Indore who completed their ten years of service at the Institute. These were: