Indian Institute of Management (IIM) Indore celebrated India’s 69th Independence Day with a series of events on August 15, 2015. The event commenced with the unfurling of the national flag by Professor Rishikesha T. Krishnan, Director, IIM Indore, amidst colourful vibrancy and great patriotic fervor. This was followed by the singing of the National Anthem, 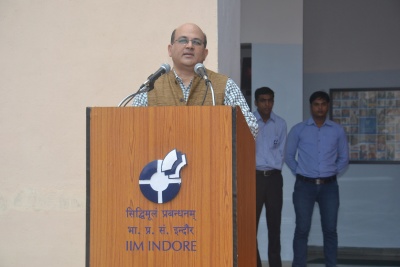 turning the quiet misty morning into one full of spirit, with students, faculty and the staff of the Institute chanting ‘Jai Hind’ and ‘Vande Mataram’.

While addressing the gathering Professor Krishnan, in his speech, spoke about India’s freedom and the sacrifices the freedom fighters made to let us all live in an independent country. “Our thoughts naturally go back to the sons and daughters of India”, he began, while emphasizing that freedom today extends beyond the concept of physical freedom only. In the light of Infosys Chairman Narayana Murthy’s statement that independent India has not been the source of great ideas and inspiration, he vouched to celebrate not only our freedom fighters but all those who have stood for innovation and progress over all these years.

Professor Krishnan paid a tribute to late Dr. APJ Abdul Kalam, while mentioning his contribution in motivating India and catapulting the nation towards scientific advancement. He also recognized the contribution of the former member of IIM Indore’s Board of Governors, late Dr. M.N. Buch who played a significant role in the development of the institute’s infrastructure. He stated that one of our biggest challenges at IIM Indore is emulating the achievements of the aforementioned individuals, and continuously striving towards improvement. By developing such path-breaking ideas, he believes, “the independence of thinking will spread further.”

Professor Krishnan urged all those present to acknowledge the value of our independence, and to strive “to be independent in both thought and action.” He concluded his Independence Day address by wishing everyone the very best for their future endeavors on this auspicious occasion. He recited a few lines from Rabindranath Tagore’s famous poem “Where the Mind is Without Fear”, which aptly concluded the proceedings of the day.