The HR & Leadership Conclave- PRABODHAN held at IIM Indore concluded on Saturday, August 13, 2016. The last day was full of discussions about innovations, disruptions, gender equality, diversity, organizational culture and the future of businesses. The day witnessed five amazing talks by experts from various top-notch industries from various sectors like manufacturing, pharmacy, IT, automobile, etc. along with a panel discussion.

The first talk of the day was on ‘Managing Disruptions’, by Mr. Sanjay Singh, EVP & Global Head-HR, Crompton Greaves. He discussed what managerial disruptions are and how they originated. He also discussed about cost reduction and how it is important for any company, whether the company is earning a lot or not. ‘Something ‘new’ is what every company requires today. A new thinking is vital, so that it creates an ability in the company culture to see the competitive ability. ‘When you work in a company which has a particular pattern of doing things, it gets difficult to do something new’, he said. He concluded his speech discussing the various attributes of disrupters, like they are disagreeable in a positive or a negative way; they have a specific habit of refraining the problems in a different way and removing constraints as well.

This was followed by a panel discussion on the topic ‘He For She’, with Ms. Surbhi Mittal, VP-Head HR, Lanxess India, Dr. Winsy Abraham, Location HR Head, CSC and Mr. Chitvan Bohra, HR Business Partner, TATA Motors as the panelists. Professor S.K. Ghosh, Faculty, IIM Indore was the moderator. Mr. Bohra presented a video on diversity and inclusion and their importance in the corporate world. Giving examples of various institutions, he said that the male-female ratio in the institutes is also less, and this is the reason why manufacturing sector doesn’t have many female employees. Ms. Mittal said that just the way a rainbow cannot be even imagined in a single color, similarly we all living in a similar world with all the same faces and gender can’t be pleasant. Nature has created us that way, and that is what brings in all the beauty, she said. Mr. Abraham, agreeing with the panelists said that males now need to take a stand and help the females feel comfortable. Females should not fight for their rights now; it is time that males help females get their rights easily.

The panel discussion was followed by a talk on ‘Organizational Socialization’ by Dr. Sunil Kumar Singh, VP-Head of L&G, Reliance Industries. He began his presentation with a few cartoons which represent how the first day of any new employee in a company is like. He then discussed about importance of onboarding in job satisfaction and the difference between orientation and onboarding. He also discussed the building blocks of onboarding namely, compliance, clarification, culture and connection; and how they help in strengthening the organizational work environment.

This was followed by a talk on the topic- ‘Understanding Organizational Culture and Its Importance’, by Mr. Deepak Bharara, Chief HR Officer, Lanco Infratech. Discussing how one can examine the culture of a company, Mr. Bharara said, ‘You can know the culture of any company within five minutes, by having a look at the kind of reception area, canteen, stores and the kind of washroom it has. The qualities of these areas determine the soothing culture of any company’. He also discussed about various companies like Apple, General Electronics and Ford developed their cultures.

The next talk was on ‘Merger & Acquisition’ by Mr. Sanjay Chaturvedi, Head HR Corporate & R&D, Sun Pharma. He discussed about the biggest pharmacy sector merger- Sun Pharma and Ranbaxy. He shared the kind of challenges both the companies face during the merger and how the huge number of employees were put together.

This was followed by a talk by Major General Raj Shukla, who spoke on the topic- ‘Leadership in Adversity’. He discussed how adversity is very important in corporate culture by giving examples of various thought leaders like Winston Churchill, Aristotle, Alexander -The Great, etc.

The valedictory talk was given by Mr. Yasho V. Verma, Former COO, LG on the topic ‘Future Business Challenges’. He said that the business challenges faced by the current generation would be absolutely different. ‘The way industry and corporates are changing drastically, performance and results are becoming more and more superior aspects of being called successful’, he said. He noted that business is about catching two rabbits namely, revenue and profit, running in two different directions. And the challenge is to catch them both. He said that before taking a career path in global direction, one usually needs to find out whether you would be able to eat the food at the place you are going? Whether you can learn the language the country speaks and enjoy it; whether you can tolerate their habits and what are you going to do when you have a child in the foreign country. These challenges could decide whether you would take your career to a global path. 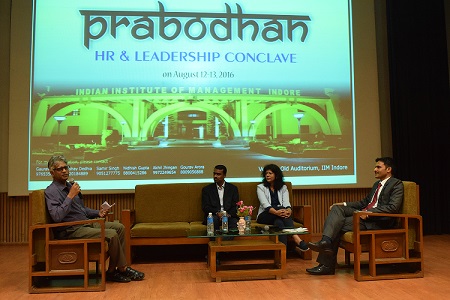 The closing remarks of the conclave were given by Professor Prashant Salwan, Chair, EPGP. The two day conclave proved to be an enriching experience for the participants including the students from the Institute and gave them an opportunity to learn from the experience of all the distinguished guests.