IIM Indore’s three students namely Aaradhya Singhal, Kamala Priya Mukkamala and Tanya Mihirkumar Shah, mentored by Professor Siddhartha K. Rastogi of IIM Indore have won second position in a B-Plan event titled ‘What an Idea, Sirjee which was organized by Narsee Monjee Institute of Management Studies (NMIMS) as a part of its annual fest, Vaayu. The team has received certificates for the same. 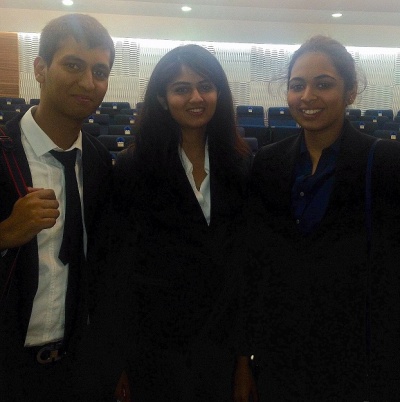 The event involved a pre-process wherein the teams had to send in elevator pitches, presenting their idea to an investor of a duration less than or equal to 180 seconds. A total of 116 teams had applied for the initial screening process. From these 116, the top five were selected and invited to present their pitch at NMIMS campus, Mumbai on November 12, 2015, in which IIM Indore’s team bagged the second prize.

According to the IIM Indore Team members, ‘The event gave us an exposure on how other business ideas are formed and also provided us with a platform to present our idea. We also received some helpful insights into improving the idea from the judges.’

The team’s idea provided a mechanism to eliminate tyres and plastics from the waste stream and introduce them as a source of fuel and energy. They named their company was titled ‘Pyoneer’, a combination of the words Pioneer and Pyrolysis, the method of manufacturing. The team had been working on the idea for over two years, constantly updating it with improvements in technology, and it was the first time that the idea was being pitched to and judged by a venture capitalist.

The experience was full of new learning and enriching for the team.