Utkarsha, the two day social fest at IIM Indore, was conducted at the Institute on December 5-6, 2015. The event’s inaugural ceremony was marked by the presence of Mr. Parikipandla Narahari, District Collector of Indore. Mr. Narahari mentioned in his speech about the importance of sensitizing people about gender issues. He also appreciated the efforts put by the Intergrated Programme in Management (IPM) Community and the students to successfully conduct the fest.

This was followed by a keynote speech by Mr. Marcus Holknekt, First Secretary, Swedish Embassy. Mr. Marcus elaborating on gender sensitivity mentioned how Sweden is the first country in the world to take the first steps towards gender neutral parental leave. He also noted how parenthood means sharing responsibility and the slow evolution of the cultural norms.

Professor Rishikesha T. Krishnan, Director, IIM Indore then declared the fest open, which was then followed by Samwaad, the panel discussion at Utkarsha in association with Cipla. The panel consisted of highly esteemed dignitaries like Mr. Aniruddha Dutta, India Macro Analyst and author of ‘Half a Billion Rising’, Ms. Reefat Rasool, Deputy Secretary at PHD Chamber of Commerce and Industry, Ms. Janak Palta, Founder at Jimmy McGilligan Centre for Sustainable Development, Mr. Pranjal Dubey, Founder of Sant Singaji Institute of Science and Management and Mr. Prashant Hemnani, Director and Chief Faculty at Globalizers. The panel discussion involved a lot of personal experiences being shared along with the mention of how important it is to realize that gender is a social construct. Utkarsha’s association with the He For She global campaign for gender equality by UN Women was also greatly appreciated.

The first day of the fest also had a Google AdWords workshop conducted by Mr. Rushabh Vasa, Founder and CEO at Instinct Media to familiarise the participants with the working and usage of Google AdWords. 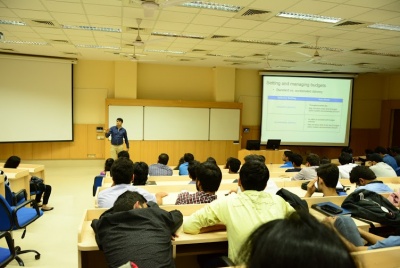 The fest had a number of business related competitions that targeted an intellectual audience. However, Utkarsha also hosted a bonfire night for the participants on Day 1, December 5, 2015 to give them a platform to interact informally.

Janhit Mein Jaari was an ad-mad competition that was conducted in association with Big FM. The judge, RJ Neetu, greatly appreciated the attempt at incorporating social sensitivity in an otherwise regular competition. Sri Satya Sai Vidya Vihar Team won the competition. Another competition which was greatly appreciated by the participants was Farmicide, a simulation based on rural lifestyle, where students were given limited resources and crisis situation to deal with, testing their real-time management skills.

Sauvetage, the live consulting event, saw the participation of NGOs and the real-time crisis faced. Moral muddle, the debate, also witnessed a lot of heated discussions. The most exciting event was The Youth Parliament which saw incredible participation and the committees discussed the issues of relevance to the current scenario in the world. In Jaago Re, the social campaigning event in association with Yoddhas, the participants were asked to campaign and gather maximum support from the crowds. Other events like Good Corp, Bad Corp,  and iNverikA- the social quiz were also conducted successfully.

The Social Fest concluded with lots of learning and new experiences for the participants, along with mesmerizing memories. The IPM students, and the main coordinators for the fest, Anshuman Singh and Satchi Sahay had been specially mentioned by all the guests for their impeccable management. The event helped the future managers to learn the tricks and skills of time management, decision making and team coordination.