Webinar on ‘Does Leadership Matter? Improving Job Satisfaction and Commitment in the Public Service’ held at IIM Indore

Home » Webinar on ‘Does Leadership Matter? Improving Job Satisfaction and Commitment in the Public Service’ held at IIM Indore 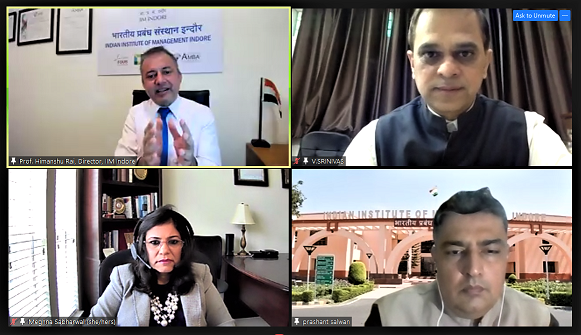 Prof. Himanshu Rai started his inaugural address by sharing insights on job satisfaction and commitment. ‘Satisfaction is when you are really happy in what you are doing, and you can draw a sense of fulfillment from what you do. Commitment is a resolve which has intensity, direction and perseverance, he said. By efficient leadership, you can influence people towards an objective, by providing them a direction. We need to move beyond employee satisfaction and look forward to engagement—and they are aligned to the larger vision of this country and the universe. We need to move beyond commitment and talk about integrity. ‘It’s not about how many hours you work. It’s about what you did while you were working for hours. Make sure whatever you do in the public service has to be for the larger good and not for the individual good’, he said. Get into individualized consideration, understand the expectations of the individuals in the public service. Engage with the people and stimulate them intellectually. Lead by example and follow your principles, he concluded.

Mr. V Srinivas shared his views on how leadership is a quest to rediscover. ‘A good leader operates with simple business rules which are easy to understand and practice’, he said. Noting that innovation and success are important in leadership, he said that innovation is an important tool to become stronger and enhance revenue productivity. ‘An effective leader needs to be open to new ideas, meritocracy, transparency, fairness and has the imagination to achieve excellence in execution of the ideas’, he said. He also threw light upon administrative ethics and leadership and noted that India’s Constitutional values are deeply rooted in high moral tones with a universal dimension. ‘Ethical leadership is all about bringing enhanced productivity by leveraging technology, fostering human capital to ensure an institutional transformation that meets the needs of the nation’, he said.

Dr. Meghana Sabharwal noted that although organizational sources such as leadership influence job satisfaction and organizational commitment, what matters the most is whether individuals perceive themselves to be efficacious in their jobs. ‘It is important to understand the psychological mechanisms underlying the relationship between leadership & job satisfaction. Job satisfaction impacts commitments and outputs. It results from the nature of one’s job or other aspects of the environment, like job security, pay, leadership, etc.’, she said. Organizations can seek to enhance employees perceived self-efficacy, which in turns determines their job satisfaction, she concluded.

Throwing light on the COVID positivity rate in the city, Prof. Salwan noted that in May, Indore’s positivity rate was 40 percent which has now come down to 0.7 percent, with the same resources, same people and the credit for this goes to effective leadership. ‘The public sector not only are expected to craft and deliver high-quality public health system during this pandemic but must also address the strains on the ordinarily routine process of the governance. An effective response to this pandemic thus requires effective administration which crucially depends on the effort and capacity of the millions of public sector workers from the front line to central administration; hence leadership plays a key role’, he said.

The session concluded with a Q&A and was attended by more than 200 participants.